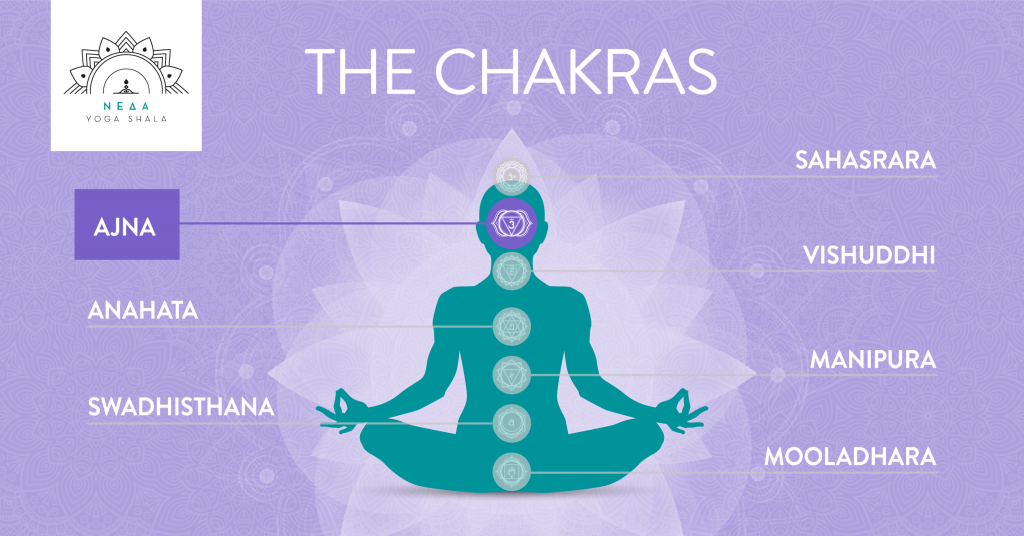 It is placed between the eyebrows, it opens towards the front and its colour is light purple. It is depicted as a lotus with two petals, which symbolise the two Nadis, Ida and Pingala, among others, or the sympathetic and parasympathetic nervous system. It is connected to the sounds of Ham and Ksham.

The Ajna controls and activates the pituitary gland, the endocrine glands and the brain, to some degree. It directs and controls the rest of the centres and the corresponding glands and vital organs. It is associated with all the senses, and especially with the eyes, but also with the ears, the nose and the sinuses, the cerebellum and the central nervous system. At this point, it must be mentioned that the pituitary gland corresponds to the Αjna, just like the pineal gland corresponds to the Sahasrara. Together, the pineal and the pituitary glands control the endocrine system.

It is through the sixth centre that the conscious awareness of existence is conquered. Here we find the superior inner power, the ability to remember and the will, and on the physical body, it corresponds to the superior control centre of the central nervous system. It is connected to superior knowledge, to a clear understanding of the world, without emotional filters, expectations and judgment; the complete knowledge that already exists in pure and unmanifested form, in the same way that a seed already contains all the information that will be manifested in the plant. The Ajna is expressed through a focused mind and meditation.

During visualization or dreaming, this internal look starts from this center. It is the space through which we cultivated awareness. While our eyes gaze the external world, the ajna is the place through which we look inside. It is responsible for the understanding of abstract notions and principles. It carries a role of guidance. It operates as a radar, and as such, what it receives depends on the direction of focus.

It is said that our energy is located in the Mooladhara, but we can become aware of it only through the Ajna. When we eat, sleep or talk without awareness, the Ajna is not activated. But when we speak and a part of our awareness knows that we speak, then this knowledge is a trait of the Ajna center.
The Ajna Chakra is the centre of superior psychic ability and it is closely connected to the solar plexus or Manipura Chakra (the centre of emotional will) and to the centre at the top of the head, the Sahasrara Chakra (the centre of universal love). It is connected to all meditation poses, such as Padmasana, Ardha padmasana, Siddhasana, Siddha Yoni Asana, Sukhasana, to the recitation of mantra Om and to the Trataka technique, as it is the first in a series of practices which require, and thus develop, the focus of the mind. The pranayama practice that is connected to the Ajna is Anuloma Viloma.

In the Gheranda Samhita it is mentioned the following (3: 28-31 ): “The sun is at the root of the navel, and the moon is at the root of the palate. The nectar that drips from the moon is absorbed by the sun, and that’s how humans are headed to mortality… Guide the sun upwards and the moon downwards. That happens through vipareeta karani mudra, the secret of all the tantras… A daily practice of vipareeta karani mudra, keeps old age and death away.”

By Effie Psiachoulia
For the Neda Yoga Shala Team.