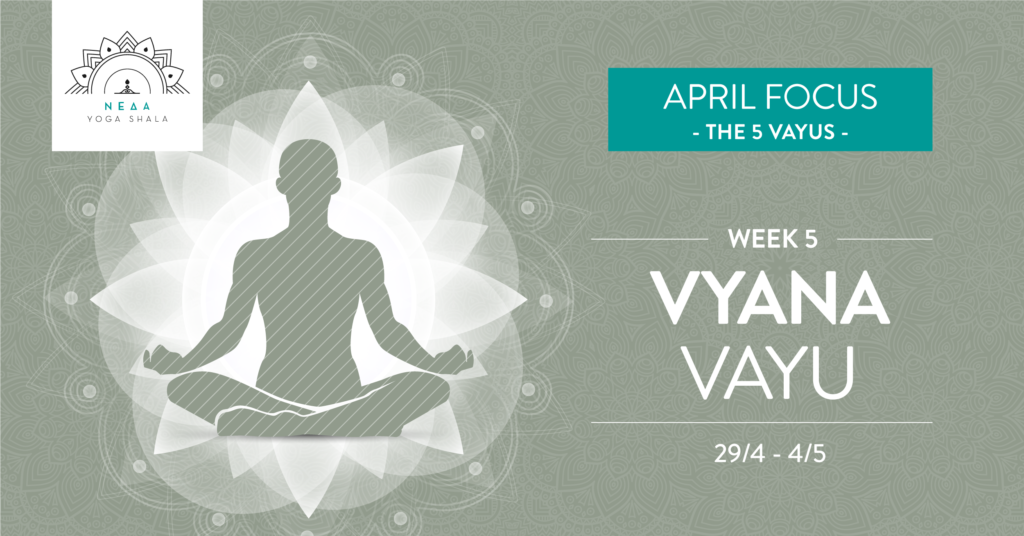 The fifth and last one of the fundamental subfunctions of the atomic prana (or vital energy) is the Vyana Vayu. This energy permeates the entire body. It resembles tiny shiny arrows that launch with high speed to every direction. It is behind all of the other prana subcategories, and at the same time, it integrates them all; and, it is its pervasive presence throughout the body that makes it so fundamentally important.

Vyana Vayu at the energy level (pranamaya kosha)
Vyana vayu acts as an energy reserve, supporting the other vayus, when they need a boost. It is the force that regulates and coordinates the existing energy in the body, by controlling its flow and movement through the energy channels. At the same time, it distributes the energy that we take in when we eat and breath. Considering that it is responsible for the general levels and flow of prana, it is only natural that we become more susceptible to illness, fatigue and stress (physically and mentally) when the Vyana is out balance.

Vyana Vayu at the physical level (annamaya kosha)
At the physical level, because Vyana moves throughout the entire body, it is the energy that regulates our systems, and ensures their unobstructed flow and function. For example, it affects the blood flow in the circulatory system, the synapses in the nervous system, the movement of liquids in the lymphatic system etc. Similarly, it is responsible for the body’s muscular coordination. It is especially active at the extremities, affecting our balance and keeping the body erect and upright. In addition, it resolves any circulatory system blocks that may obstruct seamless assimilation of nutrients received through food.

Vyana Vayu at the mental and emotional level (manamaya kosha)
Vyana Vayu supports the improved flow of emotions, as well as the free, unhampered flow of thoughts in the mind. It also connected to whether we allow or not information to be “diffused” in the body and mind, and in the same way, it is the energy which transports and “places” thoughts and feelings in the various parts of the body

Vyana Vayu is extremely important, as it is found everywhere, and unifies everything. It is said that it is because of this energy that the physical body maintains its material density and cohesion. We visualize it and feel it as rays of light moving at high speed throughout all the parts of the body. A form of energy that permeates everything, like light particles that are launched randomly to all directions, filling up our entire interior space, from top to bottom, with bright light.

The energy body to which Vyana vayu belongs, as well as all these prana aspects or subcategories are an integral part of us. And while that body is as important as as the rest of them (f.e. the physical or the mental body), unfortunately, it consumes about 2% of the awareness of the average person. As a result, we experience it a bit more intensely and profoundly, and that’s how it helps us to sense new emotions regarding ourselves, and to gradually perceive the body in a new, enriched, almost magical way.