The myth of Durga, the Warrior Goddess

Durga is perhaps the most popular Goddess in India. Her name means “The Inaccessible Castle”, and she is an invincible warrior and a loving, compassionate mother at the same time. She is usually depicted riding a tiger or a golden lion, and she is majestic and stunningly beautiful, as is appropriate for a Goddess! She has pitch black, long, wavy hair and dark almond-shaped eyes. A deep red sari covers her firm body and beautiful golden jewelry adorns her neck, her hands and her feet. She wears an imposing crown at her head, a symbol of power and supremacy, and she appears with eight or ten arms holding her weapons of power.

According to one version, Durga was created by the male Gods in order to fight the daemon Mahishasura. The Gods feeling powerless in the face of a daemon, who kept winning every battle, gathered up their forces and they created the Goddess by emitting light from their third eye. They armed her with their powers and sent her to the battlefield, to save the world from the domination of the great daemon.  But, today, we are going to find out about another great battle of the Goddess…

Once upon a time, in the very beginning of this world, but maybe not so long ago, maybe even today, our myth begins… And the myth is about what else?  The eternal battle between Good and Evil, and in our story, good is represented by the Gods (devas) and the evil by the daemons (asuras). The devas are beings of the light who, armed with love, work for the benefit and the protection of humanity, while the asuras are also beings of the light, who have attained their powers through strict disciplines and prayers, but their purpose is to acquire power, wealth and control.

Do you pray for wealth or out of love?

So, both brothers Shumbha and Nishumbha would practice strict disciplines, they would stand on one leg among five fires, with their arms lifted up towards the heavens, holding their breath for millenniums, and in that way, they managed to wheedle a promise out of Brahma, that they would be invincible against gods and men! Brahma could not refuse (because every effort is rewarded), but he asks them to pick just one thing that would be able to defeat them. Not knowing any woman capable to beat them in battle, they pick women (too but for them).

So, years go by and the daemons spread their dominion over the three worlds. Conspiracies, greediness, malice, selfishness, wars, racism, misery, terrorism, decline, lust and depravity take over the world… Humans forget their customs and traditions and stop offering sacrifices to the gods, evil prevails everywhere and humanity faces the danger of annihilation.

The Gods lose one battle after the other, until a wise man appears and reminds them that the daemons are invincible against Gods and men, but they are not invincible against a Goddess! So, they decide to visit the Great Goddess at her adobe high up on the mountain, where she hides, forgotten by Gods and men, and with chanting and pleading, they ask her to appear and save humanity from evil.

The appearance of the Goddess!

Durga listens to the pleadings of the gods and she appears outside the palace of the brothers’ Shumbha and Nishumbha. Irresistibly beautiful and sensual, emitting a radiant light, riding her golden lion, who would have been able to resist? Both brothers succumb to her otherworldly beauty and ask her to marry them! 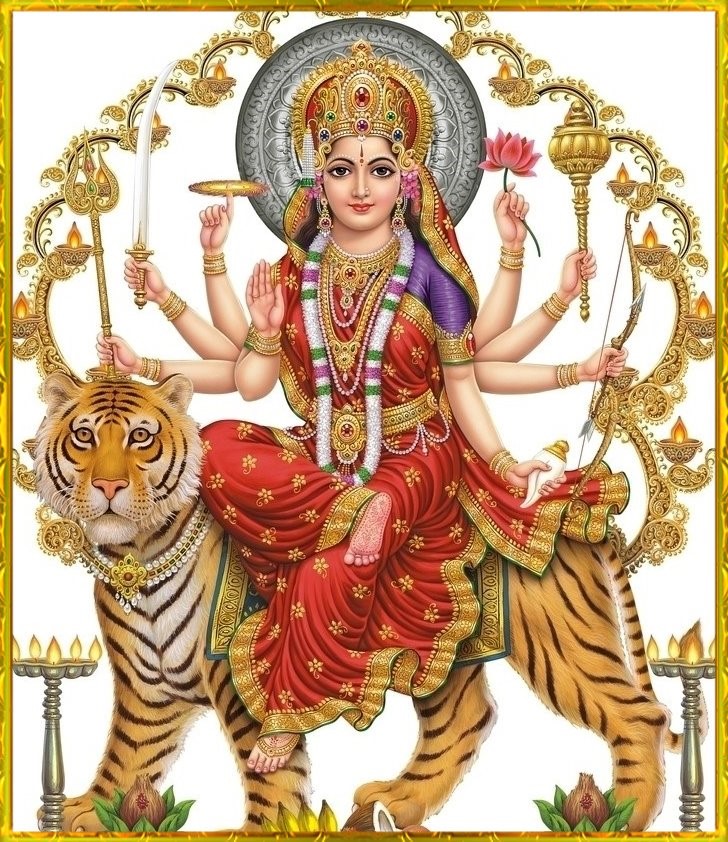 “With pleasure!” says the goddess, “but, you know when I was young, I took this silly oath and I have to keep it! I swore to marry the man who would defeat me in battle!” The two brothers, trying not to laugh, inform her that they do not fight women. “Let it be then!” she says, drawing her sword from its sheath, and with a move as light as a feather she kills their guard. In the hours that follow, the two brothers send a small army, then a bigger one, then an even bigger one, until they realize that they will either have to fight the goddess or lose everything!

The birth of Goddess Kali

They send their best generals, Chanda and Munda, and their most fierce army to fight the Goddess. A terrible battle ensues and then, Kali bursts out of the Goddess’s third eye, she storms with fury into battle and cuts off Chanda’s and Munda’s heads. But, the battle does not end here, because the daemons, not wanting to surrender their arms, they send out their most terrifying army, the Raktabijas, whose name means “drop of blood”. As the Goddess pierces them with her sword, for every drop of blood that falls on the earth, a new daemon springs out. The Goddess keeps beheading them, but in their place new, tireless daemons keep sprouting. You see, the Ego does not surrender easily… just when you think you have won, it finds the way to pop up from around the corner, constantly changing forms in order to fool you, and the more you fight it, the more it grows bigger and fights back…

The countless faces of the Goddess

At that moment, Goddess Durga makes a terrible battle cry and from her chest beautiful armed Goddesses spring out! Indrani riding an elephant, Saraswati riding a swan, Vaishnavi, Tara, Chinnamasta, Bhairavi and among them, the Goddess Kali who starts licking the Raktabijas blood as she beheads them, so that not one drop touches the earth. After a while, the mighty army has been wiped out, and only the two brothers, Shumbha and Nishumbha, remain. Nishumbha falls first and then, it is Shumbha’s turn.

“You said you would fight us on your own, but I see a whole army of Goddesses! You deceived us!” he says to buy time. “You fool! All of these Goddesses are nothing but aspects of me!” And with one move, she gathered the Goddesses into her chest and charged against the last daemon. They fought in heaven and earth, until the daemon fell down to earth, bleeding. As he was dying, one syllable sounded from his lips “Ma! Ma!” which means Divine Mother!

By our beloved Maria Stylianaki