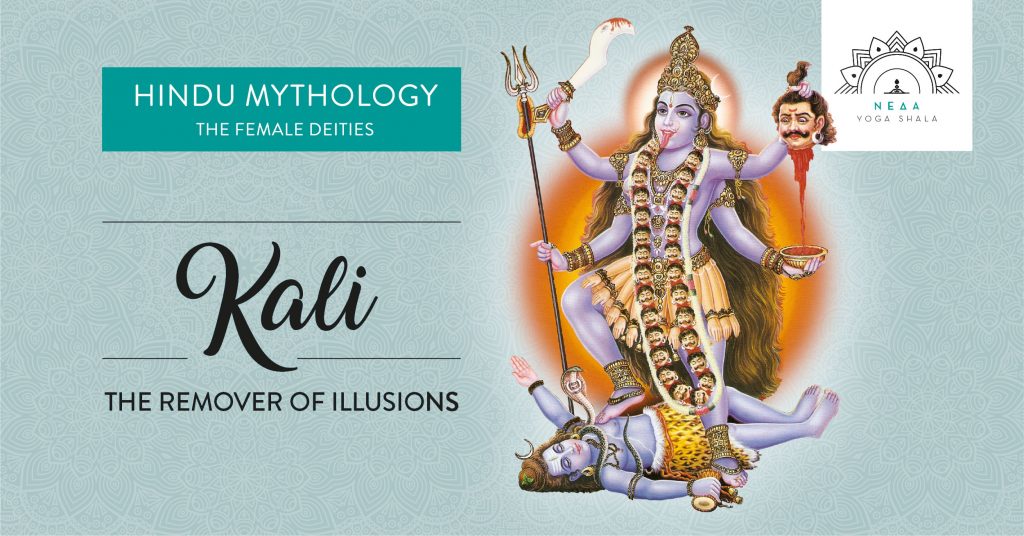 Kali – The Goddess of Revolution

In Indian mythology, the most intense aspect of the feminine is depicted as an outraged daemon that comes to the world whenever dark powers threaten it. No matter how distant Kali’s energy may seem to be, it is indispensable, and it is quite near. In nature, it can manifest as earthquakes, volcano eruptions, cloudbursts, death and birth etc. In humans, it manifests as overwhelming anger, a cry of indignation, intense jealousy etc. It is the force that limits us and it is the same force that can set us free.

We can encounter different faces of Kali, depending on how we approach her. Two of them are the most prominent. On one hand, there is the face of Kali of the woods, often appearing as a scary deity, almost daemonic. Her devotees call upon her for protection, but also for magical purposes, with seasonal, frenzied dances. In her other face, Kali appears as a benign source of love and blessing, and there, her wildness is interpreted in a symbolic way. The skulls around her neck symbolize the Sanskrit alphabet letters, from which the liberating mantras are born. Her skirt is made of hands, that symbolize the karmic tendencies she removes from her followers, while the head she holds, cut by her sword, stands for the liberation of the Ego that would otherwise separate us from her. Her naked body symbolizes the removal of all illusions, while her black color evokes the final feeling of the void, where all distinctions melt away in an eternal, formless space. Her sword is the force that tears through delusions, ignorance, futile hopes and lies. Her standing on Shiva’s reclining body reveals that she is the dynamic energy in the universe, the force that perturbs the stillness of the void, so that worlds are created within the transcendental dimension.

Kali possesses both of these qualities, the terrifying and the spiritually liberating, and that constantly puts her in a state of paradox. She carries a multilayered interpretation as a Goddess of love and destruction, at the same time. She invites us to see both the light and the dark side, and through that, to find the path beyond this duality. She invites us to look at her straight in the face and to find love beyond pain in life. The way we see Kali is very indicative about where we are in life. Whether we see her as scary, fascinating, or full of love depends on our level of consciousness, but she always calls us towards a radical transcendence of the Ego.