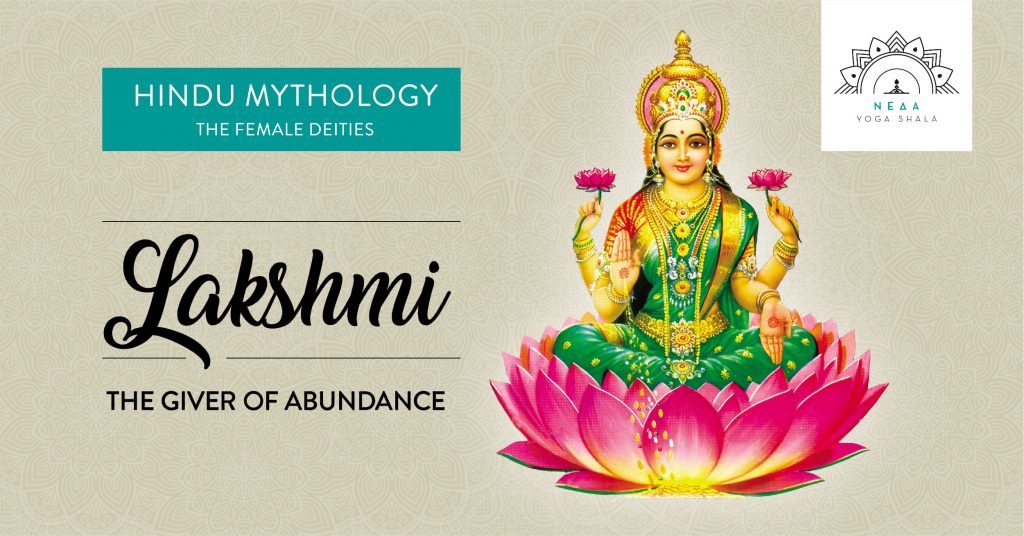 The birth of the Goddess

We have mentioned in the past the myth of the churning of the ocean  – Samudr a Manthan –  when the Gods lost their powers because of Indra’s arrogance, and they cooperated with the Daemons in order to obtain the magical immortality potion, amrita. They used the mountain Mandara, God Vishnu was incarnated into a turtle supporting the mountain on his back, and Vasuki, the great snake, coiled around the mountain, so that they could churn the ocean.

After Shiva drunk and held in his throat the poison halahala, divine objects and gifts started surfacing from the ocean. One of them was Goddess Lakshmi, who emerged out of the waves, seated on a bloomed lotus, and she was so beautiful that both Gods and Daemons just froze, staring at her, enchanted her beauty. So, she chose to join the Gods, picking God Vishnu as her husband and companion.

Lakshmi is the Goddess of wealth, good fortune, power, beauty and fertility. Wearing a red dress with gold adornments, she holds lotus flowers in her hands and her mount is sometimes the owl and other times the elephant. She reminds us that abundance does not refer only to material goods but mainly to spiritual wealth. She has four hands that symbolize the four purposes of the human existence: dharma (duty, obligation), artha (material wealth, prosperity), kama (desires) and moksha (liberation from the circle of life, redemption).

The Goddess is worshipped as the Great Mother “mata”. In homes and businesses, she is honored for prosperity, good fortune and abundance. Prayers in her name are not meant only for securing financial prosperity, but also for obtaining physical health, mental enlightenment, purity of heart and generosity to offer all of that to other people.