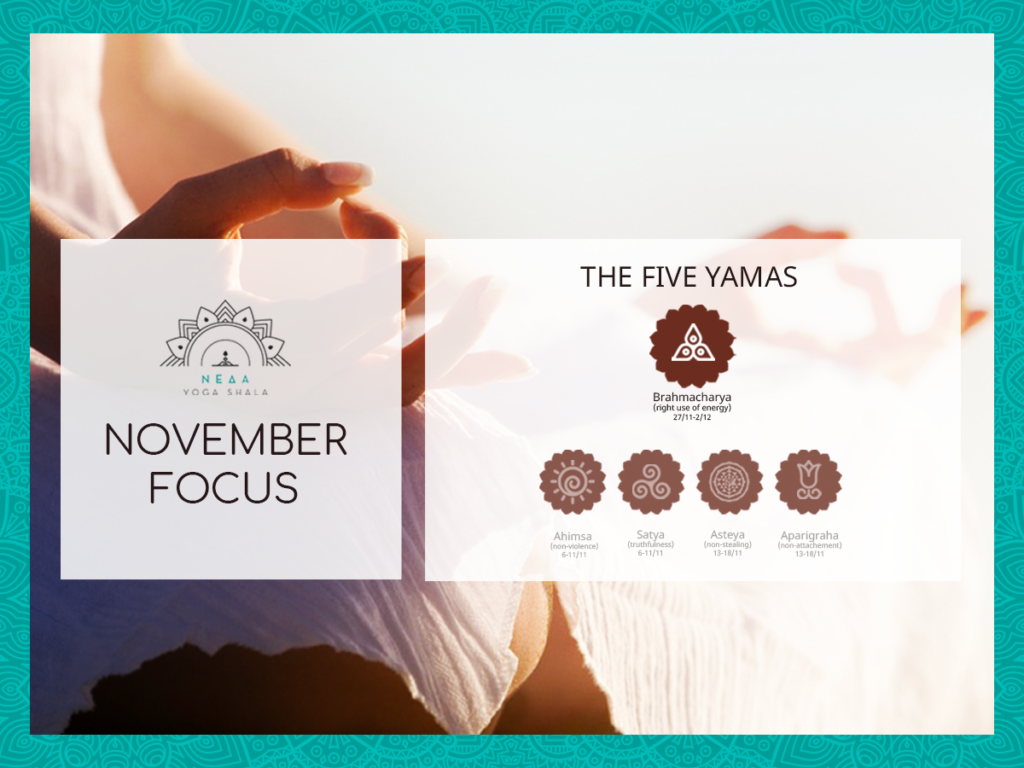 The last yama we will examine this year is Brahmacharya. Brahma is the Absolute Consciousness, and charya is “to live close to”. Thus, the word for word translation for Brahmacharya would be “the one who follows in God’s footsteps”, the one who directs their energies and interest to seeking the Brahma. So, it refers to preservation and handling of our life force, so that instead of spending it in meaningless relationships, habits, food, speech etc., it is directed to more spiritual and evolutionary activities.

It is of course natural, since we talk about preservation of energy, that the talk in Brahmacharya revolves a lot around sexual energy, the most dominant and powerful energy in the human body. Maybe that’s why, the word Brahmacharya when loosely translated, it is often constricted in the word “celibacy”. But the meaning of Brahmacharya is much more comprehensive than that.

It does not refer to the suppression of sexual energy, but to its correct management, so that instead of being spent, it transmutes into something else, more spiritual, more long-term and potentially blissful. It is about channeling it from the pelvis towards the higher spiritual centers, such as the heart or between the brows. And this, in order to be transformed into something that allows us to experience a state of deeper emotions and higher consciousness, compared to the momentary pleasure offered by the energy when it sits at the base of the pelvis.

While celibacy is not a necessary ingredient of Brahmacharya, it can be its result (e.g. in the case of a sannyasi). And that happens because, in the context of spiritual practice, it is difficult to keep a balanced mind when it is overwhelmed by passions. In addition, as mentioned above, in Brahmacharya, energy (the preservation of which is very fundamental in all its esoteric practices), instead of being spent, it multiplies. But, more importantly, in a world overwhelmed by passions and continuous switching of partners, Brahmacharya provides the right of choice and transcendence. It frees us from powerless, blind obedience to instincts, emotions and senses, a gift that has been given to us, humans, in such a beautiful and unique way.

According to many texts, we can cultivate Brahmacharya even when we are in a relationship, and many great teachers have been married. Practicing Brahmacharya does not keep us away from relationships. In the contrary, it creates a deep connection that is not defined by passions and lust, but it is full of love, purity and unity! Our approach towards our companion is no longer carnal. We see in them the embodiment of the divine, which raises commensurate feelings and respect. The true practice of Brahmacharya can elevate the relationship to something sacred and eternal!

There are many yogic and tantric techniques of transmuting energy. In yoga for example, some of them are the asanas (physical postures), the bandhas (energy locks) and the mudras (gestures). Meditations practices are also offered, such as keeping the awareness between the brows. Swami Niranjanananda Saraswati suggests the Pratipaksha Bhavana meditation as the best tool for practicing Brahmacharya, as it teaches us how to transform negative feelings into positive (e.g. feeling of revenge into forgiveness or of fear into boldness/love etc). In any case, the whole practice of yoga leads to inner change and transformation. According to Osho it is “the art of turning iron into gold. Yoga is the alchemy of our inner being!”

We will conclude with a story from a relevant satsang by Swami Niranjanananda Saraswati.

Once upon a time there were two monks, who were friends and were walking in a desert heading to their monastery, from which they were away for a longtime. In their way back, they came across an impetuous river. As they were walking along the shore looking for a bridge, they found a woman crying a bit further down, next to a demolished bridge.

“What’s wrong dear?” asks the older of the two monks.

“My family is at the village across the river, but soldiers came a few days ago, and they pillaged the village. They took me with them, and I managed to get away, but I can’t go back now, because those savages destroyed the bridge as they left…”

“Climb on my back and we will try to cross it together”, says the monk.

The other monk looks at him stunned, but doesn’t say anything. They put a lot of effort, but they finally managed to cross the river, and the monk lets the woman climb off his back. She thanks them in tears and runs to the village.

So, the monks continue on their way back to the monastery.

The hours went by and the second monk seemed to be annoyed, but he wasn’t saying anything.

“What happened and you are like this?” the older monk asked him.

“Master, I didn’t mean to say anything to you, but I was annoyed that you carried the woman. Did you forget all the oaths we have taken in our order? You know much better than me that it was forbidden to carry the woman, that’s why I did nothing to help her. How could you do that?”

The elder looks at him with love in his look, and says:

“I, my brother, helped the woman return back home, and I left her at the shore across the river. It looks like you haven’t understood the oaths, because inside you, you are still carrying her…”

As Swami Niranjan asked at the end of his speech, “Which one of the 2 monks is the true brahmachary; The one who turned his passion into action, help and contribution and then forgot about it? Or the one who buried it and keeps on carrying it?”