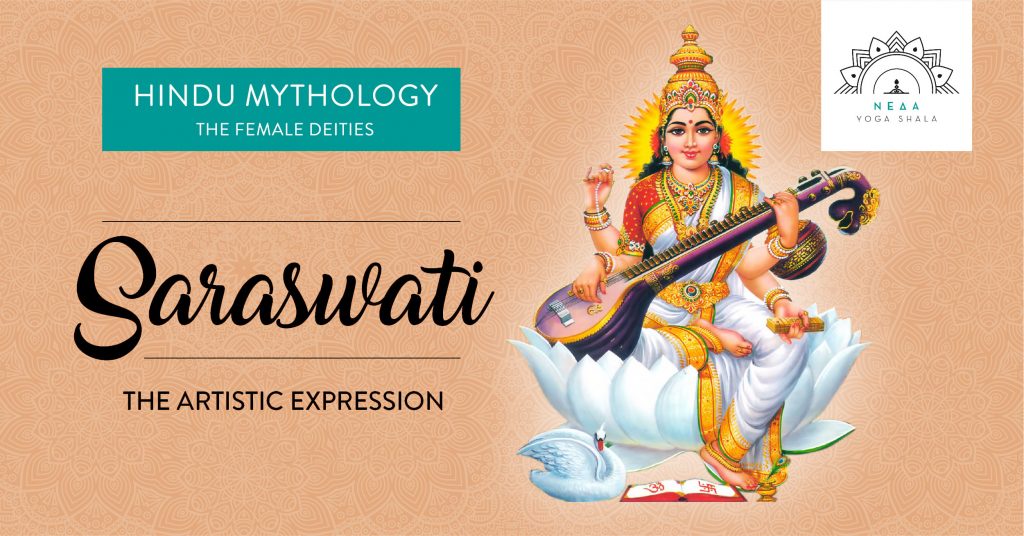 The birth of Saraswati

According to many Indian legends, before the world was even created, God Brahma was riddled with how to create order from chaos. During his comtemplation on the matter, a voice spoke from inside of him, saying “Through knowledge. And through knowledge, creative action will come”. Then, an exquisite female creature, Knowledge, came out of his mouth, in the form of  Saraswati. With 4 hands, dressed in a white sari, radiant, full of power, she was holding a Veena (a musical instrument) and was vibrating at the frequency of OM. The moment Brahma saw her, he fell in love with her. But she, feeling that she is his daughter, did not receive well the idea of being close to him, so she started running away. But, he was extremely charmed by her beauty and couldn’t look at anything else but her. In order to be able to see her everywhere that she would go, he grew three more heads to cover all directions! In order to escape his sight, Saraswati flew to the upper world, and Brahma grew a fifth head, so tall that he managed to reach her and convince her to marry him. Saraswati’s OM vibration enriched by Brahma’s breath became the primal breath of the World. Saraswati triggered Brahma’s creative knowledge and his ability to express himself. Brahma discovered the melody of the mantras, which started to expand and fill the universe with vital energy, creating shapes and structures, seas and heavens, suns and moons… That’s how Brahma became the creator of the world, with Goddess Saraswati as his Wisdom and Companion.

(Considering that the ancients texts are written in an era where all wisdom and information was passed from one Brahman to the other through speech, and specifically through mantras, it is natural that knowledge and sound are worshipped as a deity).

Modern researchers compare Saraswati to Goddess Athena. She affects speaking and thinking. Her qualities are strong in authors, musicians and spiritual seekers. In people who are often lonely and love knowledge and reading books, as well as inspiration and inner search. In people with refined speaking abilities and spontaneous creativity.

Saraswati is in these moments of clarity and insight in thinking and speaking that surprise even our own selves. According to Swami Durgananda “Upon Saraswati’s touch, a foolish person becomes a poet”.

The name Saraswati means “the flowing one”. According to the legend, once upon a time, Shiva, angry as he was with the world’s corruption, opened his third eye with the intention to destroy the world in a great burning fire. All beings panicked, apart from Saraswati, who kept calm and was transformed into a river (Saraswati river) and transported the fire in the depths of the earth, thus saving animals, gods and daemons. Saraswati’s mount was a beautiful white swan (Hamsa) and as a river Goddess, Saraswati relates to everything that flows. With water and other liquid elements, with the flow of thoughts and ideas, of speaking and writing, of music and mantras. Saraswati is the water of the rivers, the sequences of notes in music, the beautiful natural flow when talking with a friend, and she is the imaginative spontaneous narrations….

The absence of Saraswati from our inner world, as a speech quality, leads to reduced ability of self-expression and communication with others. And as a quality of intelligence, her absence is the incorrect perception of things, the negativity and “bad” mental programming. It is also that continuous flow of thoughts, that we have all experienced during meditation or before sleep.

Saraswati’s creative flow is an ever-flowing river. You cannot stop it. You can only flow with it. Using a mantra or awareness as a boat, we can recognize motives, understand out mental map and navigate not those channels that lead to pain, fear and dependence, but the ones that take us to continuing expansion, fulfillment and joy!

All of the Goddesses hide human archetypical traits, immutable through time and space. Some of them are more appealing to us, either because we relate to them, or because they show us where we want to go (e.g. Lakshmi’s elegance or Durga’s dynamism). Others, like for example, Kali, with all her rage and craziness, can scare us. In any case, our level of identification with them, shows us where we are at each moment, what prevails inside of us, and what else could emerge, and in what way. Adopting such an approach can render the research about these Goddesses extremely transformative.

But, most importantly (with the highest point being the myth where in the middle of the battle, Durga makes such a loud war cry that all the Goddesses sprang out of her insides), these amazing different deities remind that all the qualities they represent are inside us (from rage to clarity, from darkness to light…) and that even those we often blame, are necessary and potentially sacred…