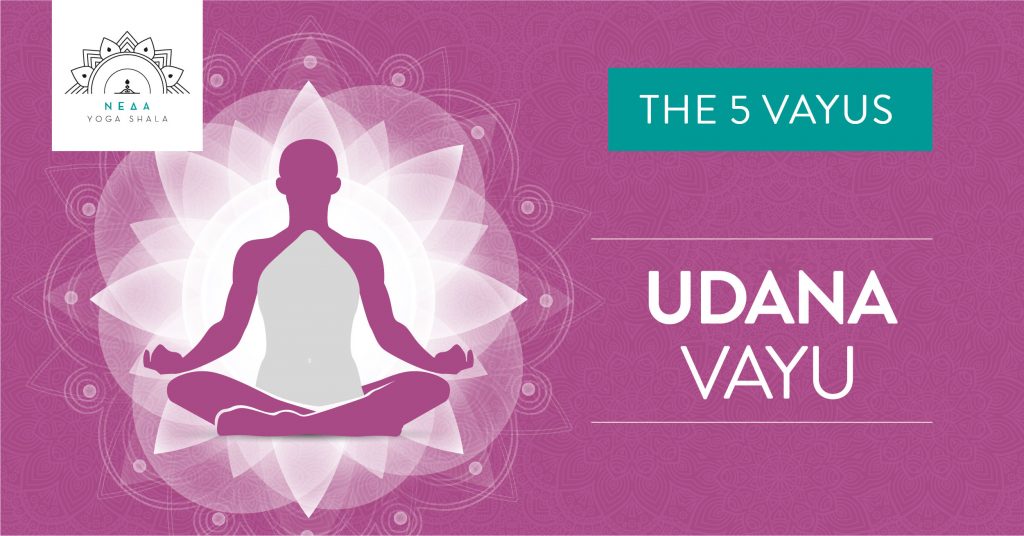 Udana vayu, one of the qualities of our vital energy, can be translated as “upward wind”. It is connected to the element of aether or space, and to the Vishuddha chakra, in the middle of the neck.  The activation of udana vayu is directly related to the healthy function of samana vayu and the good cooperation between prana and apana vayu.

While apana vayu is generally connected to expulsion and outward movement, udana vayu is the upward movement, from the neck towards the head, and it is specifically related to the expulsion of air, the exhalation, in a way that refers to talking and to producing sounds in general.

In the physical body, it is active in the space of the upper trunk, the neck and the head. It governs the muscles and the strength of the extremities, as well as the functions related to the eyes, the ears and the nose. It is connected to the nervous and endocrine systems, to our ability to speak and express ourselves, as well to the unobstructed flow of thoughts. It controls development and metabolism, through the thyroid and the parathyroid glands, and it is the force behind our ability to stand erect.
When udana vayu is in balance, we hold ourselves straight, and we are joyous, enthusiastic, alert and strong willed. We are in the mood to overcome our restrictions, to face the challenges and to evolve, both physically and mentally. We are capable of communicating creatively and of freely expressing our personality.

When it is out of balance, respiratory problems related to the neck may be observed, as well as involuntary movements of the limbs or loss of balance.
When out of balance, udana can lead us to inappropriate, negative or excessive talking, or conversely, it can render us incapable of intellectual or emotional expression. When udana is disrupted at the intellectual level, it becomes difficult to assimilate new ideas and experiences, which leads to rigid behaviours. In some of those cases, it is manifested as fear of the unknown.

Udana vayu is responsible for the higher levels of awareness, and a balanced practice which incorporates a variety of asanas for activating all of the three vayus (prana, apana, samana), can be complemented by a more focused activation of the udana vayu, as to lead the body and mind towards a more refined and subtle level of awareness, into deeper relaxation and meditation.
The asanas that focus on the upper back and chest, the neck and the head, as well as the inverted poses, are all beneficial for the activation of udana. It is important to approach the inverted poses progressively and with caution. They are often contraindicated in menstruation, and in people with heart disease and high blood pressure, osteoporosis or obesity.