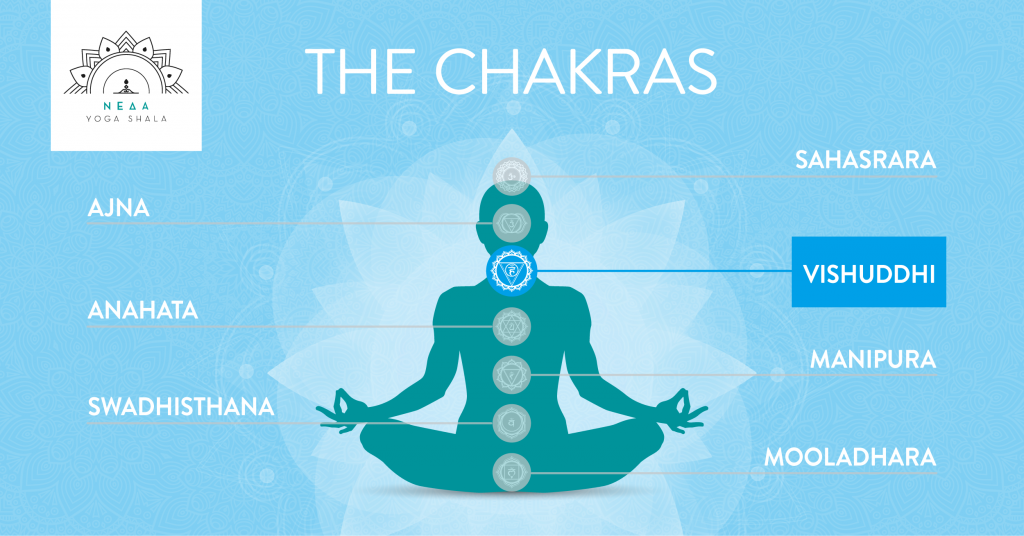 If we draw an imaginary line from the bump of the neck and the thyroid gland towards the spine, we will find the area of the Vishuddhi Chakra. The Vishuddhi Chakra is the 5th center in the traditional Chakra model. It is related to the element of Aether, and just like  Aether, meditation on this center will cause the mind to become pure, empty and free!

The center of expression and communication

The Vishuddhi Chakra relates to the sense of hearing, the vocal chords, the chin, the larynx, the pharynx etc. So, it is not randomly linked to expression and communication. Sitting on top of the 4 first main Chakras, it communicates their contents to the outside world, expressing all that we hold inside; from our joys and sorrows, to our ideas and inner beliefs, our desires and intentions, our anguishes and fears. It is through this center that the creativity cultivated in the other centers (such as the Swadisthana), can be expressed outwards, not necessarily only in the form of speech, but also in the form of singing, music, painting…

When this center is awakened, a person can express their thoughts and emotions without fear, even if they concern their weaknesses. Their speech is clear, confident, sincere and creative. But whether it is also gentle and compassionate depends on what is happening in the other centers, such as the heart center. A malfunctioning Vishuddhi Chakra can be recognized in people who speak in a very quiet voice or are shy. Which is not necessarily a sign of lack of knowledge, but a sign of difficulty in expressing it.

The word “Vi” means deep and “Shuddhi” means purification. The Vishuddhi Chakra is considered to be a purification center. In Tantric literature it is written that from the Bidu, a spot in the back of the head, springs a vital liquid known as Nectar (in other traditions it is called Amrita, Soma, Nectar of the Gods, Divination etc). In reality, this nectar has two faces. On one hand, when the Vishuddhi Chakra is inactive, this substance works like a poison. It flows freely downwards, towards the center of the belly (the Manipura Chakra), where it is consumed by its fire, ending up in “the process of decomposition, degeneration and finally, death in the bodily tissues” (Swami Satyananda). But, when the Vishuddhi Chakra is awakened, this liquid remains in the throat, instead of flowing to the lower centers, and it transforms into a source of longevity and vitality. “The secret of youth and regeneration of the body lays in the awakening of the Vishuddhi Chakra”. It is not by chance that in most of the cases, the teachers who have worked with this Chakra appear a lot more younger and hale than what would be expected in their age. It is often mentioned that this liquid causes a state of “blissful intoxication”.

There is a beautiful story in Indian Mythology, where Gods and Demons worked together in order to draw out of the depths of the ocean the divine nectar that would grant them immortality. In order to stir its waters, they used a mountain, the  Mandara, which was submerged upside-down in the sea as a stirring rod, and a snake, Vasuki, which they wrapped around the mountain like a rope. For hundreds of years, Gods and Demons pushed and pulled the snake in turn from the tail and from the head, trying to make it move the mountain.  They did it with such determination, that the snake got tired and started producing a poison from its mouth. A poison so strong that it could destroy everything. At that moment, God Shiva appeared. He swallowed the poison, all at once, and the poison was purified in his neck without harming him (and that’s why one of his names is Neelakanta, “the one with the blue throat”).

This story, among others, teaches us that the poison of life is easy to digest when the Vishuddhi Chakra is awakened. An open Vishuddhi Chakra represents a broadened state of perception. Life itself is considered to be a sponsor of experiences, which lead to a deeper understanding. There is no good or evil, or any negative event that we must avoid. Even the negative aspects are integrated in the all-encompassing shape of existence. With an awakened Vishuddhi, even the poisonous and negative life experiences can be absorbed and transformed into a a state of bliss.